There are several breeds of duck, including the Muscovy, Aylesbury, Pekin, mule, Indian runners, Khaki Campbells, and others. Unlike most other birds, ducks have a unique way of mating to produce fertilized eggs in their females. 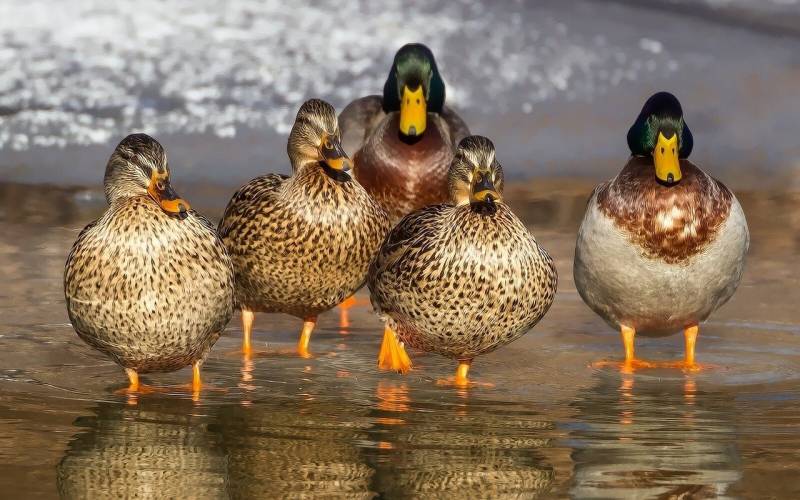 Mating ducks are usually very aggressive. As most waterfowls, ducks form seasonal bonds with each other before breeding. Wondering how ducks really do the mating? Here is a guide.

Mating in plants and animals is being facilitated by sexual organs. Male and female ducks have their special organs for mating, which are unlike 97 percent of other birds. In the male duck or drake, there is the possession of a penis or phallus. The phallus is contained in a sac within the body.

During mating, this penis is ejected from the sac to facilitate the introduction of the sperm. The penis can reach a length of about 20 centimeters during intercourse. It is shaped like a corkscrew with ridges and backward spines on them.

Complementarily, the female ducks, have a corkscrew-shaped vaginal canal to accommodate the phallus of the males. The vaginal canal is highly specialized for the mating process. The vagina is long and twisted with several spirals and blind pockets. These uniques genitals are shared by some other birds like ostriches, geese, swans, and emus.

How then do they do the real mating? Before then, let us first examine how they select their mating partners both in nature and domesticated circumstances.

This is usually not the case in domesticated poultry as the number of available males may be limited. But in the wild, there is a selection of mating partners.

The male ducks try to impress the females they want to mate with as the final choice is dependent on females. Once the choice is made, the male will defend the female from other males. Then once that breeding season is over, the duck forms a mating relationship with another male for the next season.

Conversely, there are very few species of ducks that form polygamous mating relationships. This happens when a single male mates with several females in the same environment.

Female ducks ensure to select the strongest male when choosing their mating partners. This is to give assurance that it can defend them against other lurking males in the habitat. Male ducks are very aggressive and many times forcefully mates with females. This can result in the injury or death of the female.

The mating is initiated by the male mounting the back of the female duck and grabbing its neck with his bill. Once in position on the back, the female will enhance the copulation by relaxing and lifting her tail feathers. The male launches its penis into the vaginal canal of the female.

Once the penis is in the vagina, it launches into the oviduct. The female helps the mating process by making the vagina more receptive to the penis. Lifting the tail feathers and holding their body levels help the penetration.

The vaginal wall is also contracted and relaxed to enhance full penetration. The male then discharges its sperm into the vaginal canal. The mating process is usually aggressive, and this is why the females select the males they want to mate with.

The sperm, if discharged into the right canal, fertilizes the eggs. This will result in laying of fertilized eggs within a few weeks after the mating.

The female genital have several blind pockets, which are used to prevent fertilization if unwanted males try to mate with it. This is a means of preventing unwanted fertilization.

The female genitals are also designed to prevent adequate penetration of unwanted male suitors. The female positions its body to prevent the penis from reaching the vagina; thus the sperm is deposited in one of the several blind-ended pockets.

When Is She Ready?

Laying eggs begin once the female reproductive parts are well developed. This can vary from specie to specie, and it’s generally within the first four months or more. A female duck can lay up to 12 eggs in a clutch. Some can lay up to two eggs per day to complete a clutch.

Interestingly, duck mating is that the female duck can keep the male sperm for about two weeks and even more. The length of keeping the sperm depends on the specie of the duck. This will ensure that a single mating session can produce several fertilized eggs.

There can be more than one male sperm leading to a fertilized batch of eggs. This can happen when a male is unable to defend his female mate from other male suitors. Even with the blind-end pockets, the mating with another male can be successful.

Ducks have an amazing mating pattern that seems unexpected for birds. But just as you have found out, they are not the only ones in this.

The mating is not just unique because of their genitals but the entire process. From the selection of mating partner to the monogamous partner status to the actual mating act.

It is also interesting to note that females can prevent unwanted fertilization. The process of duck mating is worth a diligent study!