Home > Behavior > How Do Dogs Talk To Each Other? – 5 Ways Described

Just as we do, dogs have their own unique way of communicating with each other.

We might never fully understand their way of communication, but one thing is for sure, dogs like any other living creature, transmit information to one another.

We have narrowed our minds to the idea that dogs and other animals only communicate during mating or finding resources.

That is not true because their reasons can get more complex, and we might never fully discern. 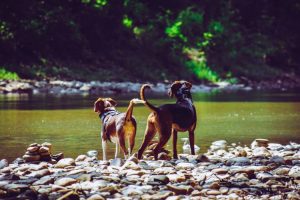 However, it is not entirely complicated to discern what they are trying to communicate with each other if we watch them closely during their communication.

Since a dog is a man’s best friend, and a friend knows how a friend does things, humans have picked different ways in which dogs can communicate to us and to each other.

Dogs can use visual, audio, chemical, and physical communication, among other forms.

5 Ways Dogs Talk To Each Other

Dogs have a coded way of talking to each other, and if you are not an observant person, you might never get around to picking up their secret language.

As earlier mentioned, the way dogs talk to each other is never the same way they communicate with us.

Their communication is mostly making sounds, body language, and signs.

Whether they are trying to communicate with us or talk to each other, dogs will wage their tails in a particular manner.

The way a dog wags its tail is deeply connected with the way it feels at that particular moment. Tail wagging is mostly to show excitement.

Some even believe that the direction a dog wags its tail will tell whether their feelings are positive or negative.

If you are a dog parent, you must have noticed that your dog sometimes raises or droops its ears every time they are with other dogs.

This one of their unique ways of talking to each other. It is widely believed that if a dog raises its ears, it is attentively listening to the other.

On the other hand, if a dog’s ears are drooped down, they might be showing submission, surrender, or acceptance.

When you see your dog bite its playmate during their playtime, don’t be alarmed that your dog is getting aggressive.

Biting is part of happy communication during playtime. The bite is probably not deep nor harmful, and it should be an affectionate bite.

You know the way we “High-five” each other to denote a moment of triumph or happiness? It appears that the man’s best friends have the same expression too.

Since they are always on their fours, it can be a challenging but worthy action.

This is especially if a dog has its full trust in its playmate. This gesture is a trustful expression in a dog’s world.

It is mostly believed that when a dog raises its hind legs, they are on heat. However, it happens that in the dog’s world, that is not always what it means.

When a dog rears up its hind legs, it can be a show of affection to its playmates. It is not always what it looks like, after all, huh?.

Why Dogs Talk To Each Other

Sometimes, there shouldn’t be any reason at all to talk to each other.

Sometimes, we just talk because we must talk, and I believe the same goes for dogs and other animals in general.

As it seems, the universal language dogs love to use is barking. When a dog barks, it can mean a whole lot of things.

All you need to know is to identify the kind of sound they produce when they bark.

This is the only way you can discern what the dog is trying to communicate.

We train our dogs so that they can understand us. This is quite selfish!

Perhaps we should start training ourselves to understand what our little best friends want from their fellow dogs or us.

The most fantastic thing about all these is, dogs don’t need to be trained to understand each other whatsoever because the ability to talk to each other is deeply rooted in their DNA.