Dogs can detect seizures long before it throws someone to the ground.

They become aware of the impending seizure between 10-20 minutes before it happens.

A person with a seizure disorder is mostly taken unawares by this condition.

However, having a dog with seizure detecting capabilities will help the person when the inevitable strikes. 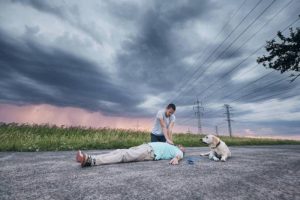 These dogs mostly hang around to guard the seizing person until help arrives.

Some of them are even so “tech-savvy” that they know how to alert a relation for help using electric devices.

These dogs with such amazing capabilities have been trained to be the Seizure Response Dogs.

There are also the Seizure Alerting Dogs. These are trained to alert when a seizure is about to strike.

These dogs have an outstanding skill of detecting scents of an oncoming seizure.

The dog’s ability to detect an impending seizure in humans is a fascinating fact.

It is also still a secret that is yet to be fully unearthed.

It is so interesting that an animal would know what would happen next to your body, while you, the owner of the body is in total oblivion.

Here are a few listed ways of how dogs detect seizures in humans and help rescue them when they are in an inconvenient situation or location.

Two groups of dogs are skilled when it comes to seizure attacks.

There are those trained to detect and alert when a seizure is about to strike.

Some respond when the seizure strikes.

However, one dog can be trained to have both skill sets.

A seizure alerting dog is trained to detect when blood sugar changes drastically in a patient with a seizure condition.

They can pick this fluctuation through a skin whiff.

Some even go to an extend of detecting the change from the smell of a person’s urine.

Once they detect an anomaly, they can respond in various ways depending on their training.

As it turns out, when a seizure is about to happen to a person, the odor of that person drastically changes.

These odors are distinct to seizures only, and this makes it easy for a seizure dog to pick it.

According to Craig Angle of CPSP, ‘’A dog’s brain can detect massive amounts of chemical information at thresholds that are much lower than any machines.’’

It Is A Natural Behavior

According to some theories, some but not all dogs have the ability to perceive chemical changes in human blood.

This is a skill given to some dogs. It does not necessarily come from any training.

Such dogs make perfect candidates for both SAR and SRD training.

Trained Seizure dogs can respond to a seizure situation in several ways, especially if they are trained for seizure rescue operations.

According to the reports from people who adopted seizure dogs, some have reported positive results.

Some, however, have been disappointed beyond words. It is essential, therefore, not to put too many expectations on these dogs.

Consult deeply with the dog trainer on the abilities of a dog you want to adopt.