The sleeping behavior of cows changes according to the situation they are in.

They’re social animals, but because they are also prey animals, they are fearful and forever vigilant. Like large mammals, they doze off on their feet (or hooves). 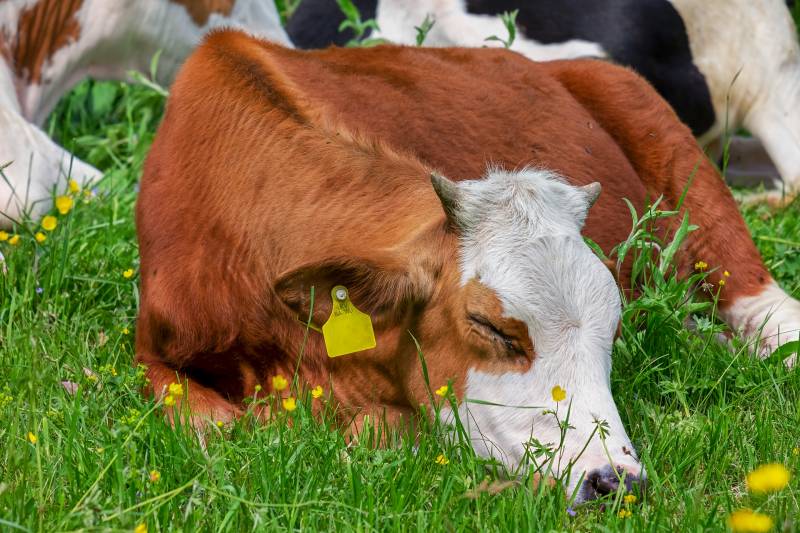 In fact, by nature, cows nap more often than taking a long sleep. But that doesn’t rule out a deeper, more restful sleep. Even they know that they need a decent sleep to stay healthy and function properly.

A Quick Shut-Eye While Standing Up

While a cow may not be in a deep sleep while standing, it can doze off lightly. Cows don’t require a whole lot of sleep. A cow is similar to a human being when dozing off.

We’ve all had a quick shut-eye on a moving train or while suntanning on the beach. So how do cows sleep? They doze more than they experience deep sleep. While they can doze off and sleep lightly on their feet, for deep REM sleep, they lie down.

Sometimes when a cow is lying down, it may have its eyes closed. A closer look, and you will see the twitch of an ear- a sign that she is awake. Also, how do cows sleep in the area they find themselves?

Cows are clean animals and they like a clean resting place. A cow won’t easily lie down to chew the cud in a filthy area. It will prefer to doze off standing up. If the resting area is clean, cows will prefer to lie down.

When to eat, when to lie down, when to sleep – cows have a circadian pattern. This is the physiological and behavioral changes in a day that follows a regular pattern. Part of the pattern is that cows lie down for up to 14 hours a day.

The interesting part is that although cows spend such a large portion of the time lying down, little time is spent sleeping. In fact, a cow only gets about 4 hours of sleep time.

They stand up again every few hours before lying down again. While a cow lies down a lot, it only sleeps a fraction of that time.

And interestingly, cows usually don’t sleep those 4 hours at one time. She sleeps for short periods that can add up to about 4 hours.

Essentially, according to a published article – ‘Applied Animal Behavior Science’, a cow naps briefly throughout the day and night. This sleep can be just between 1 and 5 minutes in length.

Most times, cows are out in pastures, but they can spend some in the barn as well. For sleeping, a cow won’t require an elaborate or expensive building. Cattle will need a barn of some sort. It should be draft-free, and have a decent-sized window to let in the sun and fresh air.

If they are in the pasture, at night, cows herd together for protection. Farmers use different materials for cow bedding, from sand to sawdust to shredded paper and rubber. Bedding for cows to sleep on in a barn can be organic or inorganic.

There are other kinds of cow bedding. These can be any materials that absorb moisture while still being soft and comfy to cushion the large cow.

For a cow to be comfortable sleeping, she’ll want bedding free from moisture to avoid bacterial growth. Their barns require thick, soft, comfy material for their large, hefty bodies to lie down on when they sleep.

A newborn calf is very sensitive to temperature changes. It relies on its mother to maintain the right body temperature. These small newborns rest the best part of the day.

Both the mother cow and her calf will sleep on and off during the day for short periods. They will sleep for half the day. A calf of 3 months old will sleep up to 25% of its resting time.

A healthy calf will sleep in a curled-up position. It will have its tiny hooves tucked up under itself, and its head will be resting back along the body.

Work from Swedish universities reveals that a good portion of cows’ lying down time is spent asleep. Stages of lactation can determine the amount of time that cows sleep as well as the time of day it is.

It is thought that cows have a diurnal sleep pattern – active in the day and sleeping at night. Like humans, especially older ones, a third of a cow’s day is spent drowsing. Our understanding, therefore, is that cows have much the same sleep patterns as us humans. 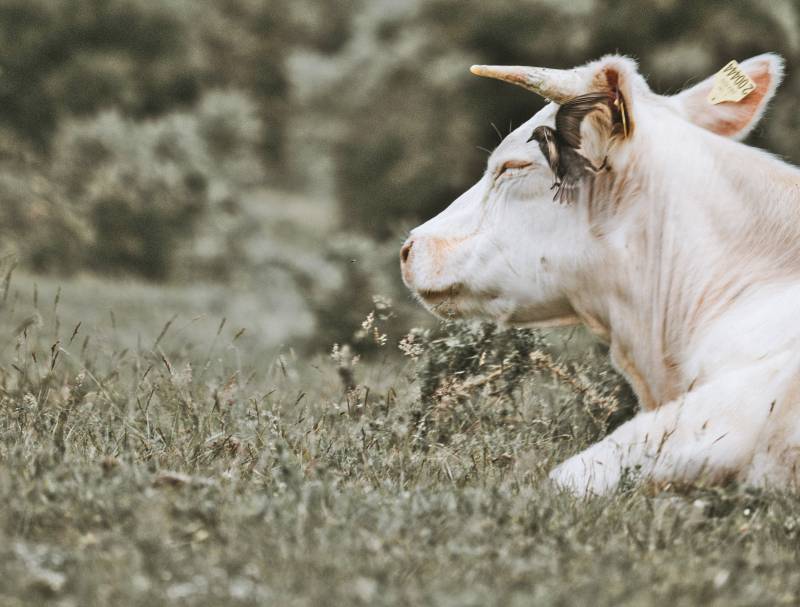 Sleep with cows can either be NREM drowsing while standing or REM, where sleep muscle tone is reduced. The cow is lying down with her head resting. During this REM sleep, a cow can have this rapid eye movement and muscle twitches.

Lying Down Part Of The Sleep Process

Drowsing is a state between being fully conscious and asleep. In cows, when they are drowsing, you will find them in a state of quiet rest with their eyelids relaxed. However, research has found that lying time is essential for cows.

Cows give up socializing and grazing to spend significant time lying down. Bovines become frustrated when they are deprived of lying down. They stomp their feet and head-butt other cows. This kind of behavior has been noted during observations.

Lying deprivation induces sleep deprivation, which has a detrimental effect on the behavior and productivity of lactating dairy cows. It’s vital to ensure that sufficient stalls are available.

How do cows sleep? They require conditions that encourage lying, allowing them to get their short power naps.

She Sleeps In A Less Vulnerable Position

When a cow sleeps, she can sleep flat on her side, but as a prey animal, this isn’t often. Sleeping in such a position makes her vulnerable to predators. She rather sleeps on her chest, front legs folded and both back legs to the one side.

Her head is usually positioned back against the flank. Sometimes in a herd, she will rest her head on another cow’s body. She may allow her head to rest on the floor.

We hardly ever see cows lying on their sides. The usual position is with their front legs under their body, back legs together on one side.

A few studies show that cows sleep roughly 4 hours a day. They are big, amicable animals that don’t ask for much. They rely on comfortable flooring, which allows them to lie down for longer sessions.

They aren’t able to adopt the right posture needed for sleep. Lying is a high priority for cows, and lack of lying and sleep can impact their welfare and their production of milk.