Home > Interesting Facts > How Do Camels Survive In The Desert? – All You Need To Know

Camels, also known as the ship of the desert, are one of the hardiest animals on the planet!

Desert species’ challenges include lack of food and water, sandy or stony ground surface, thorny plants and trees, and a hot, windy climate. 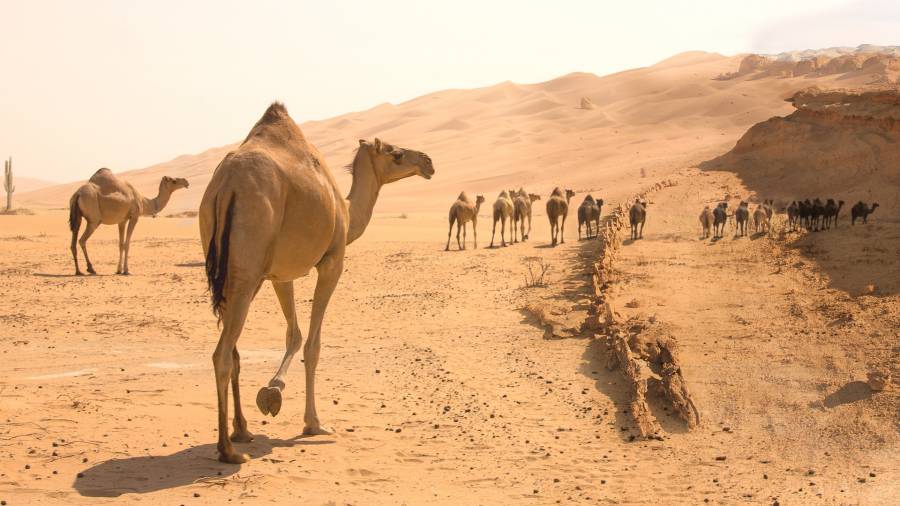 How do camels survive in the desert? Do they store water in their hump?

To begin with, camels do not store water in their humps; a camel’s hump holds no water at all – it stores fat! This fat is used as nourishment when food is scarce.

When the fat in the hump is used, it becomes limp and droops fat is scientifically known to be an excellent energy source.

Unlike glucose, the energy derived from the oxidation of fats is higher, hence their ‘resilience’ without food.

How Camels Survive In The Desert?

Camels have various adaptive mechanisms, which earned them the title; ‘ship of the desert’.

Amongst them are physiological, anatomical, and behavioral modifications. In this context, the three broad classifications will be treated.

Anatomical Adaptations Of The Camel

Integument Of The Camel

Every part of the camel’s system functions in water conservation one way or the other as that is the biggest challenge to survive in the hot climate.

The integument of the camel is specifically built to prevent water loss by evaporation. Camels have thick, woolly coats that insulate them from the intense heat radiated from desert sand.

They also have padding on body regions that are friction and pressure-prone.

And also, during the summer, their coat becomes lighter in color. It helps in reflecting light as well as helping to avoid sunburn.

The camel’s skin is one of the significant anatomical distinguishing factors that help camels survive in the desert.

The pedestal, a thick tissue covering the sternum of camels, is also an adaptive mechanism as it helps raise the body from the hot surface and allows passage of air for cooling.

Camels have large footpads which are elastic with two fingernail-like toenails on front. These are also essential structures for walking on the desert sand which is not possible for other ungulates.

They can’t walk on the tips of hoof-covered toes. The advantage of this broad leathery pad in camels is to disperse their weight on a broader surface area, and their feet don’t sink in the loose sandy soil.

A camel is easily identified with the presence of one or two solid elevations on their backs, called humps.

As mentioned earlier, a Camel’s hump does not store water as popularly idealized; it stores fat metabolized when there is little food and water supply or complete starvation.

Modifications Of The Nostril, Eye, Ears, And Lips

Camels have a slit-like closable nostril that protects against blowing sand and moistens the desert air on its way to the lungs.

Also, when camel exhales, water vapor becomes trapped in their nostrils and is reabsorbed into the body to conserve water- Camels can save a lot of water because of this ability.

They also have split upper lips, which assist feed selection and easy prehension during browsing. Their mouths have a thick leathery lining, making chewing of thorny desert plants feasible with no cuts or damage to the mucosa.

These fascinating animals are also known to possess small wound ears covered with hair protecting them from the penetration or entrance of the blowing desert sand.

They have long eyelashes that help protect the eyes from the sun and the blowing sand. There is a presence of the third, clear eyelid that protects their eyes.

Shape Of Their Red Blood Cell

Unlike other animals with oval and biconcave Red blood cells, a camel’s Red Blood Cell is ellipsoidal, reducing its size.

It is to enable easy and smooth movement within the viscous. Camels have a very high water-conserving ability and are one of the mechanisms in reducing the blood’s dilution index.

A camel’s blood is syrup-like, and movement against the thick fluid may be impossible for larger cells. Hence the modification ensures even and effective transport of oxygen for respiration.

Physiological Adaptative Mechanisms Of The Camel

Whether it’s the development of a specific feature, hardening of a region, or removal of a structure, many of the anatomical modifications of the desert camel are aimed at the sole reason of ‘water conservation.

The basis of these ‘adjustments’ is aimed at minimizing water loss from evaporation and desert heat.

Some domestic animals like cattle lose 20 to 40 liters of fluid daily through fecal excretion, camels, however, lose only 1.3 liters.

It is one of the primary methods for preventing water loss in the desert. Fluid is reabsorbed in the caudal part of the intestines, and the feces is reduced to small, hard balls which can be used as fuel.

The camel’s rumen also plays a vital role in conserving water. It does this in two ways; first, the rumen of hydrated ungulates and the foregut of camels contain a large volume of water, which makes up about 20% of its body weight.

Osmoregulation By The Kidney

The kidneys of a camel actively function in conserving water in the body.

The kidneys help to reabsorb water from the filtrate, specifically achievable with their long loops of Henle and a well-developed medulla. 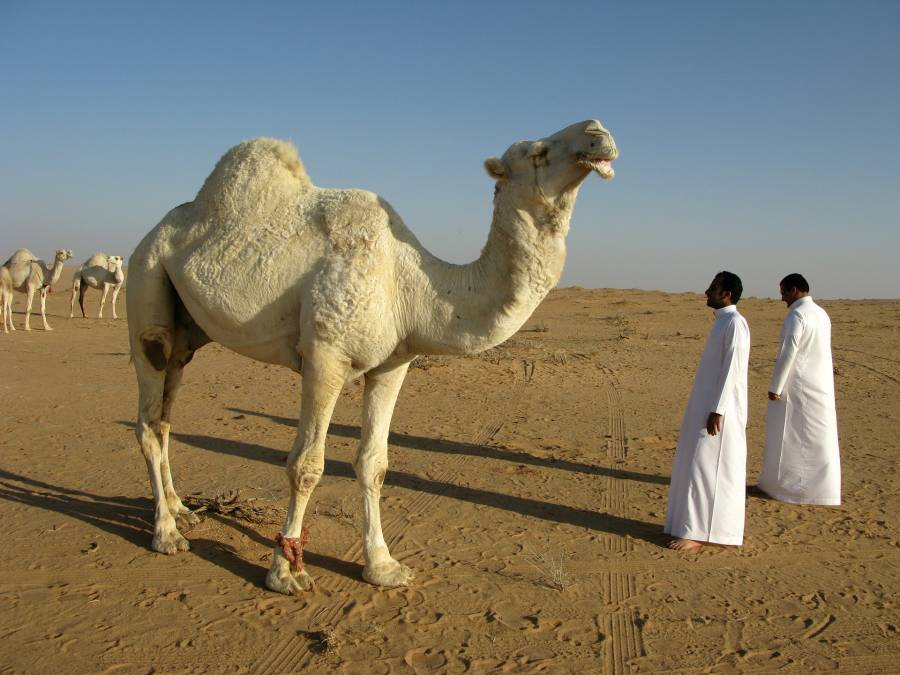 The medulla of a camel’s kidney takes almost 80%of its total mass—this helps in increasing the concentration of urine excreted- the osmolarity.

A dehydrated camel only excretes drops of urine which are observed as crystals of salt at the back of their legs.

Camel’s homoiothermic ability is specially developed and suited for the demands of the harsh desert clime.

They can alter their body temperature to adapt to the warmer temperature during the day and the colder one when the sun is down.

They also have a unique characteristic of ‘selective brain cooling’ The camel can cool only its brain, excluding the other parts of the body when the core temperature increases beyond the normal threshold.

This is done by the transfer of heat between blood vessels in the carotid rete of the brain.

Camels are opportunistic feeders who can feed on a wide variety of plans. The camel selects only a few leaves from each plant and ingests the foliage parts. It prefers halophytes plants.

Camels can also take in a very large amount of water on one occasion to make up for the previous fluid loss.

When they sit, the positioning of the sternum allows circulation of air prevents heat from concentrating on the relaxed abdomen.

As it walks, it constantly adjusts its position such that a minimum of its body parts are exposed to direct radiation, and it doesn’t just sit openly in the sun. It tries as much as possible to rest in cooler spots.

Another adaptive behavioral mechanism is a camel’s sexual behavior.

They have an extended breeding season that enables their young ones to be given birth for a longer period, increasing their population and enhancing their continued existence in the desert.

Camels are fascinating animals; by now, you understand they are not just called ‘ship of the desert’ for no reason.

The title had been earned through a series of adaptation and resilience, enabling them to cope with the heat and survive for long in the absence or little availability of water.