Home > Interesting Facts > Do Cats Like Dogs? – All You Need to Know

The relationship between cats and dogs is often confusing to people. Some think that they dislike each other, while others believe that they have a deep bond. 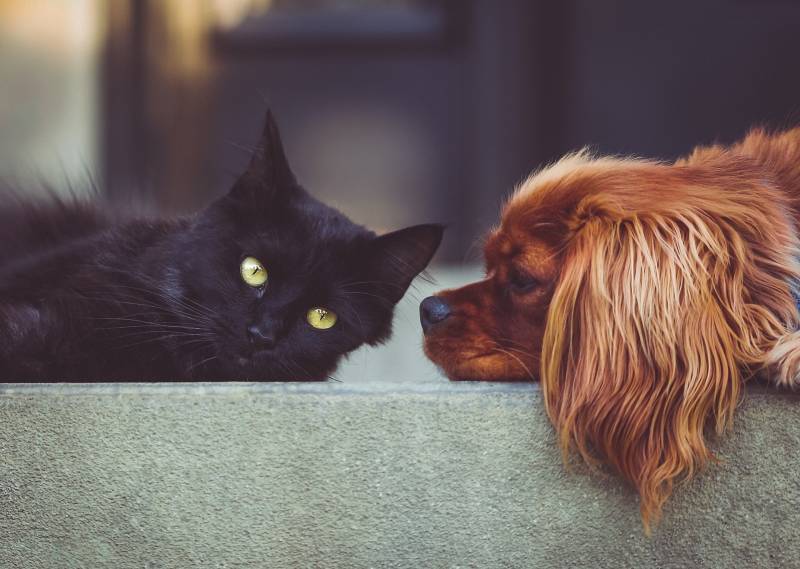 The truth is that whether a cat likes dogs depends on its personality and breed. Let’s explore the topic of whether cats like dogs more below.

Many cats like dogs; they may live well with them and are playful and affectionate towards them. Here are a few cat breeds that like dogs:

This stocky and muscular cat breed has an affectionate personality, which makes it a breed that adjusts well in the presence of dogs.

The Maine Coon is one of the most giant breed of cats, but their size does not make them aggressive. In fact, they are an affectionate and friendly breed of cat that likes dogs.

This long and sleek cat breed known for its distinctive markings is a good match for dogs due to their active and vocal personality.

Ragdoll cats are a relaxed breed with affectionate traits. Their friendly and nonaggressive personality means that most of them are happy in the presence of dogs.

These long-haired cats have an inactive and skittish personality. It means that some of them like dogs while others don’t; it mostly depends on the distinct nature of the Persian cat.

Although the breed is essential in determining whether cats like dogs, other external and internal factors determine how much they like them.

These can include factors like their environment and how they are socialized.

Because each cat is unique, there are many different ways cats show that they like dogs, but here are a few of the factors that determine that whether cats like dogs:

The breed of a cat determines its common behavioral traits. If a cat comes from a lineage where they were used to dogs, it is likely that the cat will like dogs.

It’s easier to link a cat’s personality to their breed if they were bought from a breeder, but it’s more difficult if you got them from a shelter or discovered them as a stray because many cats these days are “mutts.”

However, your cat’s personality may be influenced by dominant features from a certain breed that appears to be physically present.

The Kittens are Socialized with Dogs at a Young Age

Kittens must be introduced to dogs before they reach the age of four months to avoid becoming aggressive or hesitant towards them.

Kittens that learn to trust dogs at an early age are far more likely to be outgoing, affectionate, easygoing, and brave in a chaotic setting.

Like humans, a cat’s temperament and personality will be shaped by its life experiences.

A cat that has lived on the streets for a considerable portion of its life may be more territorial and anxious than one who has always been sheltered and well-fed.

Feral cats are likely to have a skittish personality, making them more afraid of dogs than cats that were born in shelters or at home.

But predatory aggression includes silent predatory attacks; killing prey without prior vocalization. On the other hand, the brain mechanisms that promote traits other than aggression are less well known.

This brain activity varies for each cat, dependent upon its breed and genetics.

The oxytocin receptor gene, which is associated with human and animal bonding, may also be linked to cat sociability.

One polymorphism has been related to the personality of cats, which is defined as “irritable, domineering, strong, and grouchy.” This gene is dominant in domestic and feral cats.

Cats react when faced with stress. Two forms of coping methods have been discovered in kittens in response to stress, both of which can impact if cats like dogs.

When presented with a tense situation, proactive cats become aggressive, and they may attempt to leave or investigate the issue.

These kittens are courageous and active. On the other hand, reactive cats are shy and silent and react to stress defensively, such as by hiding.

If a cat has grown up in an environment where they are used to the presence of humans and interact well with them, they will likely adjust well with dogs.

It is especially true in cases where cats see humans interacting in a friendly nature with dogs.

If a kitten’s mother likes dogs and has been in contact with them in the presence of the kitten, the kitten will likely pick up on this and will like dogs as well.

Interestingly, kittens may acquire their fathers’ warmth and bravery. Even without early socialization, kittens born to friendly fathers were friendlier to adults.

Given that these kittens were also more fearless when presented with unknown objects, they probably developed a general fearlessness rather than a liking for humans.

How to Get Cats and Dogs to Like Each Other?

It is possible to certainly get cats and dogs to like each other if you consider certain factors before placing them near each other.

To keep the cat and dog safe, the essential thing is to do the research and then analyze the current pet’s personalities and the newcomer to the household.

Prepare ahead of time to find a compatible match. After a pet is chosen, an introduction must be made.

Simply putting a cat and a dog together to “work it out” might result in a hazardous and perhaps fatal situation. 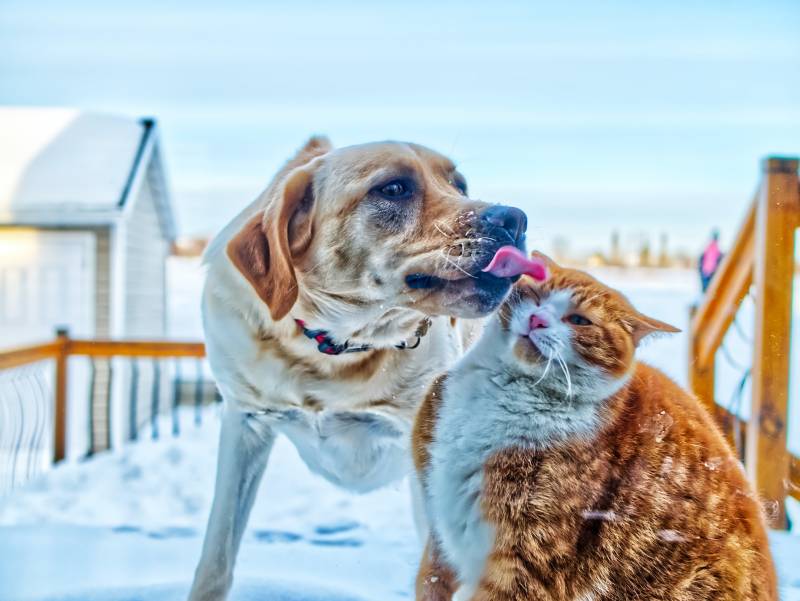 Consider the existing pet’s personality and demeanor before choosing a new pet. If a dog with a high prey drive has been permitted to pursue squirrels, cats, birds, or rabbits, introducing them to a cat is definitely not a good idea.

If a dog has been hostile against cats in the past, it’s also a hint that having a cat might be too risky. If a cat has been violent or fearful of dogs in the past, introducing a dog to their life may be too stressful for them.

If there’s a large dog or one who likes to play rough, an adult cat rather than a tiny kitten might be considered.

No matter how much cats and dogs like each other, there is one area where no compromise can be made, and that’s in food.

In comparison to dogs, cats require more protein and fat in their diet. A dog may be tempted to take a bite of cat food due to its attractive flavor, but it is harmful to allow a dog to consume cat food.

Separate feeding stations should be established.

It’s important to consider how different cats react to the presence of dogs. Even if a dog has previously lived with a cat, new cats may not be tolerated.

The complex relationship between cats and dogs is ever-changing, and hopefully, this article has provided you with some insight into the topic.