Home > Interesting Facts > 6 Reasons Why Cats are Afraid of Water

When it comes to cats and water, there’s a widespread belief that they all are afraid of it.

Some people might be astonished if they see a cat swimming around in the bath on its own, but you might be surprised to find that not all cats are afraid of water, and some will even want to swim in it. 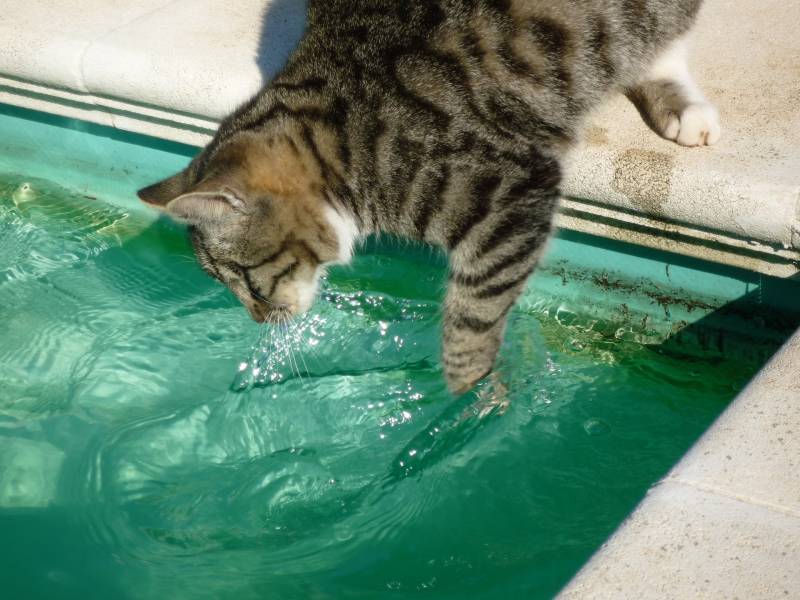 Why Is My Cat Afraid of Water?

Most domesticated cats will go to considerable efforts to avoid being wet, and there are various reasons to explain why.

One reason may be that because the species originated in arid regions with minimal contact to rivers or lakes, water is a foreign element they don’t like.

Cats are more prone to be afraid of water due to the damage that it causes to their fur. They are meticulous creatures that spend most of their time grooming themselves.

Wet fur makes a cat exceedingly uncomfortable and takes a long time to dry. Wet fur is also thicker than dry fur, making a cat less agile and easier to trap for predators.

There’s also the element of surprise. For example, accidentally falling into or coming into contact with large amounts of water for the first time may be a terrifying event for a cat, making it afraid of water.

Despite this, many cats appear to like playing with water flowing or dripping, such as from kitchen/washroom sinks.

Cats are attracted to the flow of water and the sounds it creates, which might increase a cat’s innate desire to grab prey.

Reasons – Why Cats Are Afraid of Water?

Cats are afraid of water for a variety of reasons, depending on their breeds and personality.

Despite the fact that some cats enjoy swimming, many others may shudder at the sight of water or puddles. Cats dislike water for a variety of reasons, but the following are the most common:

1. Coats That are Thick

If a cat has a long coat and begins to swim, its coat may grow too thick, making it difficult for them to stay afloat.

Cats’ fur isn’t water-resistant; therefore, they don’t feel as safe in the water since they’re not as nimble.

Cats are also quite sensitive to odors, which is why some of them don’t like swimming in the open water.

They may be turned off by the smell of the water or the chemicals in it, which might explain why a cat refuses to drink tap water.

Another reason a cat may be afraid of water is that its body temperature plummets.

Because domestic shorthairs have minimal fur, the water may reach their skin immediately, making them feel chilly and anxious to get out of the water.

4. They have a History of Living in the Desert

Cats are meticulous self-groomers, so they aren’t as attracted to water as humans are.

The fact that cats originated in the desert, on the other hand, is a more plausible explanation for their dislike of water. Indeed, the ancestors of today’s domestic cats evolved in dry, desert environments where they didn’t need to build a bond with water.

Big cats are, without a doubt, at the top of the food chain in the wild. Our pets originated from smaller cats that had to adapt to their dry, scorching surroundings.

Furthermore, their forefathers knew that when they were wet, they were an easy target. Water-logged hair can make it difficult for a cat to flee a predator.

If a cat is wet and chilly, its internal body temperature might drop dramatically.

Cats are afraid of water because they spend most of their time grooming themselves. Water not only ruins a full day of primping but also wipes out vital pheromones.

Pheromones, which are necessary for marking, tracking, and even mating, are diluted or drained when cats get wet.

Are All Breeds of Cats Afraid of Water?

Although most cats hate being in the water, some cat breeds like it, or their personality is such that they do not mind things like being given a bath. In fact, some cats even enjoy swimming in it.

Tigers, leopards, jaguars, lions, and ocelots are known for cooling down in watering holes and have excellent swimming abilities.

Turkish Vans are a breed of cat that likes swimming, so they’re known as the ‘swimming cat.’ With their long bodies and rounded paws, they are built for swimming.

Despite being one of the largest domestic breeds, Maine Coons like swimming as well. Their muscular bodies allow them to stay afloat, and they’ve even been seen to scoop water with their paws.

It is visible in households where Maine Coons’ try to scoop the water from toilet bowls.

Bengals are also excellent swimmers, and because they are descended from Asian Leopard Cats, they retain their innate desire to splash and play in the water.

The domesticated cat species, such as the Turkish Van, Maine Coon, and Bengal, are less afraid of water and enjoy a swim now and again because the texture of these breeds’ fur distinguishes them from other breeds, making them more water-resistant. 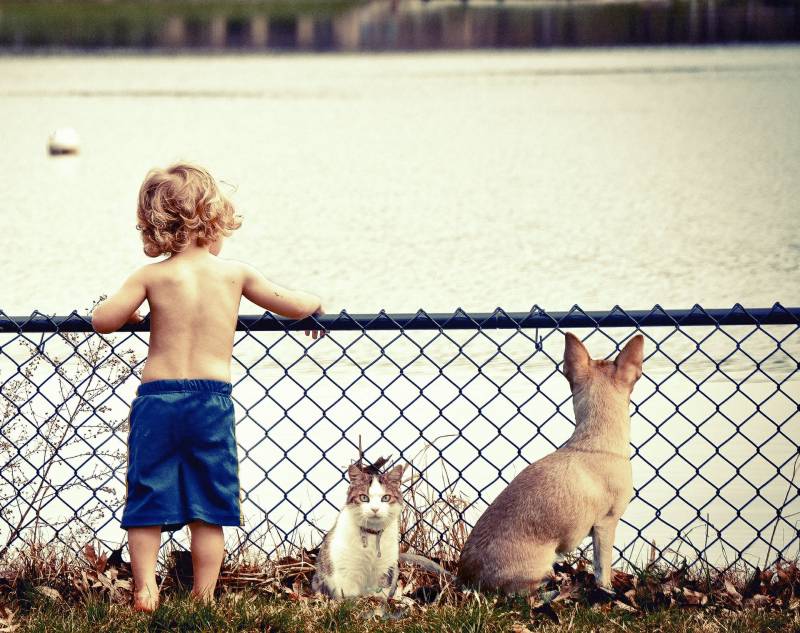 Why do Cats that are Afraid of Water Sometimes Play with It?

Some cats may enjoy playing with water in their bowl or water fountain with their paw. They will sit and lick the water off their paw before repeatedly dunking it.

There are a few reasons why a cat is playing or touching the water in its bowl:

Most cats prefer a wide short bowl so that they do not have to put their head in the bowl to drink from it. Cats don’t like it when their whiskers brush up against the side of their water bowl.

Another reason is that it is enjoyable. Because water flows, even the tiniest brush of a paw or a whisker might elicit playful behavior. It may not have started as a play, but the cat may have discovered that dipping its paw in the water caused it to spin around and become a pleasurable pastime.

It might have dipped its paw in the bowl out of curiosity regarding light reflection or movement or out of a need if the dish was too narrow to fit its whiskers properly.

Some cats will dip their paws in if they can’t see the waterline because the water level isn’t kept steady. Make sure a cat isn’t suffering from any visual issues.

Cats with failing vision will sometimes seek water or food with their paws. The next stage is to determine if a cat’s activity is due to the water bowl’s size, shape, or position or whether it is genuine play behavior.

Cats are afraid of water for many reasons, as explained above. Depending on the breed and personality of the cat, they have different reactions when they are close to water.

While some cats have a lifelong aversion to water, others may be taught that they are not in danger while wet. It is essential to respect a cat’s emotions and never force them to do something they don’t want to do.