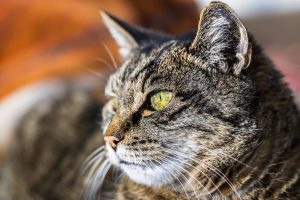 Remember when you were a teenager and had tons of blackheads and pimples? Chances are they were your worst nightmare.

Not only are they unpleasant to look at, but they also have terrible timing.

Now, as a grown-up person, you might think those teenage nightmares are far behind you.

Well, if you are a devoted cat parent, believe it or not, you have many blackheads ahead of you.

Yes, cats can get blackheads.

But how do they form? Should you do something about your cat’s blackheads? And…ultimately, are blackheads always just blackheads?

Blackheads (or medically known as comedones) are clogged hair follicles or skin pores.

They slowly fill with dirt, and as time passes by and they get bigger and bigger; eventually, they start protruding.

When a blackhead is squeezed, a black, paste-like substance comes out.

Blackheads got their name based on appearances.

Initially, as a mixture of dead cells, oils, and dirt, they are white-grayish, but once exposed to air, the mixture oxidizes and turns black.

The Science Behind Cat’s Blackheads Formation

Blackheads occur on the cat’s skin when shedding dead cells and natural skin oils mix with dirt and build-up within the hair follicles.

This accumulation puts pressure strong enough to cause follicle distension.

The most crucial factor that contributes to blackheads formation is poor skin and coat hygiene.

Blackheads are particularly common in young cats going through puberty.

They usually occur on the chin and around the lips and muzzle area.

In young cats, the distribution is limited to the listed regions, and there is no place for concern.

More often than not, the blackheads are self-limiting.

Generally speaking, the increased incidence of blackheads in cats can be associated with three conditions:

Is It A Blackhead Or…?

Blackheads in cats can often be confused with:

Blackheads In Cats – To Squeeze Them Or To Treat Them?

Restrain your urge to squeeze your cat’s blackheads.

Squeezing the blackheads can get them infected or even spread the accumulated materials, thus prompting another more severe and heavily distributed breakout.

Blackheads in cats need to be appropriately addressed.

If left untreated, the debris will keep in accumulating, and the follicles will become more and more distended.

Blackheads can be treated at home with specially formulated “follicle flushing” shampoos that contain benzoyl peroxide.

It is advisable to have your cat bathed with such shampoos twice per week, for two weeks in a row.

Then, once the condition is successfully managed, bathing your cat once per week will be enough.

It is advisable to brush your cat with a soft-bristled brush.

This is helpful because it loosens the debris accumulated on the surface of the cat’s skin.

It should be noted that the shampoo must remain on the skin for at least 5 to 10 minutes to achieve efficacy.

Never assume that it is safe to use human or dog blackhead products on your cat.

Plus, we all know how much cats love licking themselves.

If they lick the shampoo as soon as you apply it, the efficacy of the treatment will be reduced.

It is advisable to keep your cat focused on something else while the shampoo acts on the skin.

Playing with her or giving her tasty treats is the right way of drawing her attention away from the shampoo.

Blackheads can get infected. Keep in mind that an infected blackhead warrants a trip to the vet’s office.

In such cases, in addition to medicated shampoos, the treatment includes a long course of antibiotics, steroids, and sometimes even clipping the affected area.

Simple blackheads have good prognosis. As a cosmetic issue, they can be successfully controlled.

However, the prognosis for complicated blackheads depends on the underlying cause.

Poor skin and coat hygiene is a valid contributing factor.

The best way of preventing blackheads in your cat is by keeping its cat skin and coat clean and well-groomed.

Although cats are indeed particularly good at keeping themselves clean, additional grooming effort from your side is much needed.

Blackheads are a common issue in young cats going through puberty.

In such cases, they are limited to the facial areas.

If occurring in older cats and other places on the body, they need to be examined by a veterinarian.

Blackheads are easy to diagnose, and unless complicated or infected can be easily treated at home with medical shampoos.

Taking proper care of your cat’s skin and coat is a good way of preventing this cosmetic issue.